Wines of the sand 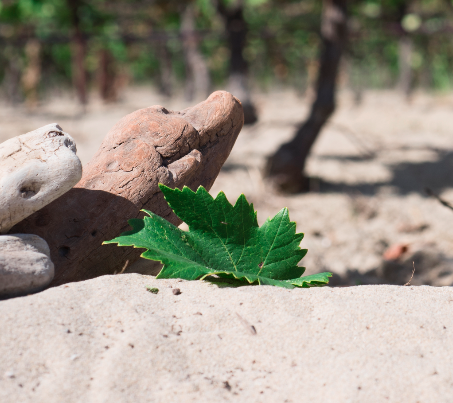 The elements making up the soil are extremely important in the quality of the grapes and influence the flavours and aromas of a wine. On this level, sand and wine are a winning combination. A soil made up of siliceous rocks (sand, sandstone and flint) will give lightness and finesse to the wines. In general, they are plains bordering the sea or big rivers. These sandy soils are more suited to early-ripening varieties. They are hot and airy and retain little water (good drainage). They are light-coloured and therefore reflect the light. On the surface, the soil is often poor in organic matter and fertilizing elements, but richer deeper down.

In France, there are many different types of sand which make our terroir special and allow us to make wines with a unique style. There is almost pure sand without any organic matter, sand mixed with pebbles, and clayey sandy loam marl. Some soils are also more suited to dry and general wines or fine and elegant reds.

Sand also played an important role in the history of winegrowing because is the best protector against the terrible phylloxera.

All the sandy terroirs resisted this voracious insect which enabled the development of the vines. This observation was made in around 1875, when the South of France was devastated by the phylloxera invasion. The only soils that escaped it were sandy and poor soils. These crumbly soils without adherence prevent the phylloxera bug from moving and asphyxiate it. It was at this time that the coastal regions began planting vines in the sand and enriching the soil with large quantities of natural fertilizers.